Based on an email written by Jon Ekstrom in April 2020

This is news on methane clathrates from Sir David King, and an attempt at a digest of the two sides of an argument on methane and the Arctic.

These are very large deposits of solid methane in the Arctic, under the permafrost on both land and under the seabed. They hold an amount of carbon estimated to be greater than all the Earth's oil and gas reserves. I put this together in January after seeing David King's videos on methane clathrates from the Arctic circle kindly provided by a colleague.

First off, methane is more climate forcing than CO₂: each methane molecule has approx 23 times the warming effect of a CO₂ molecule when measured over 100-year period. I first heard about clathrates (also called hydrates) in a house party in Cambridge in 2003. Some of us have been worrying about them ever since.

Of all the 20 or so positive-feedback systems (exponential systems which will make climate change far, far worse - if you're unfamiliar: https://www.pnas.org/content/115/33/8252), clathrates are the one which many have punted to the hundreds or thousands of years timeframe for a host of reasons, mainly that most are below the seabed at ocean depths of more than 300m, which should make them either safe from warming, or because the methane will dissolve in the sea on the way bubbling up to the surface.

The reason this is important, on a likelihood x consequence way of thinking, is that if a significant proportion of the methane IS released from the Arctic this could be a kind of game-over, with Earth's temperatures shooting up rapidly by perhaps 6-8°C. This would change all the grain-producing regions' rainfall patterns etc - a catastrophe perhaps on a civilisation-ending scale as mapped out by Jem Bendell. Given that is a bigger question than any humanity has ever asked or faced, even a small likelihood of a methane issue needs very serious consideration. A lack of Arctic research, a lack of understanding of the gravity of hysteresis (see Steffen et al above), and a simple incredulity that the world could really change this much (psychological inertia) combine to create this situation.

1. Has the clathrate gun begun to go off?

The potential for a massive release of methane from methane clathrates / hydrates in the Arctic is called the clathrate gun hypothesis: https://en.wikipedia.org/wiki/Clathrate_gun_hypothesis.

This has been argued and punted for years.

Last summer 2019, the Russians came to the Arctic Circle, a rare event, to present some results. One thing they highlighted was the appearance of massive craters in the permafrost, caused by methane explosions. Sir David King, the long-serving govt climate advisor, summarised their findings in a talk. Here is a 1.5 minute cut (this is the key video to watch in the whole digest):
https://www.youtube.com/watch?v=ibsnJfJwyZ8

This is the video which sent me into a kind of shock in January, because if there are widespread methane-clathrate releases, this is possibly the worst news I have ever heard.

Major release of clathrates alone have been predicted to have the potential to raise the Earth's average temperature very significantly (somewhere there may be a published figure I cannot find right now).

2. The US Geological Survey and Yale University are both sceptical on the role of methane in the Arctic

This is the contra view. Note they discuss general methane release (like smells from the bottom of rotting ponds) from the permafrost (which is already happening as well, a related issue), and also the potential for methane clathrate / hydrate release, not to be confused.

There are several other videos following this.

3. Peter Wadhams, in return, thinks Yale and USGS are conservative and he Peter agrees with David King (both British)

Peter is the Arctic scientist from Cambridge who wrote "Farewell to Ice" and agrees with David King that this is an issue.

Here is Wadhams criticising the sanguine approach of the previous video and covering a lot of other useful ground:
https://www.youtube.com/watch?v=D3L0R6LzEUE

What is also interesting is that no one has modelled what a clathrate-gun effect of 0.6C or whatever in a single year would do to global climate. He compares it to nuclear-winter research which influenced world govts on nuclear war. Why have we not modelled this even if it is of low likelihood? The consequences are greater than anything we have imagined.

Disturbingly, his assessment at the very end of that video is that climate change has already tipped without Carbon Capture and Storage (CCS) - using technology to suck carbon out of the air, already well underway in massive pilots. It's probably simply a typically pithy British analysis, which his Arctic-albedo and other tipping points mean that decarbonisation is no longer enough. Amazing. So his "Manhattan Project" is CCS.

4. An astronomer's centrist take on permafrost carbon and methane

This lecture provides what I think is an evidence-based and centrist summary of the evidence around the permafrost, and highlights several major problems beyond methane. It is quite technical with graphs so skip this if you wish.

I like this lecture: as he is not in this "field" like the other videos, it's his take on the data:
https://www.youtube.com/watch?v=aYxrTNSG2E0

5. The permafrost is a big frozen compost heap, and the disappeared Arctic sea ice was our sun hat

At minute 6:06 in this same astronomer's video https://www.youtube.com/watch?v=aYxrTNSG2E0 he discusses the possibility that the melting Arctic sea ice will lead to such rapid temp increases in the Arctic that in effect it self combusts the way compost heaps used to in England in the spring.

Such a runaway loss of carbon from the permafrost will only occur if the Arctic begins to warm much faster in the future, above a temp rate increase of 0.88C per decade.

Like Wadhams, this lecturer also thinks that decarbonisation is not enough and geoengineering and CCS is already necessary

6. How have methane levels changed over geological time, and over recent decades?

They've gone up enormously with human civilisation since 1500 AD:

They have gone up and down in the past 5 decades and no one is sure why:

Since 2007, methane has been on the rise, and no one is quite sure why. Some scientists think tropical wetlands have gotten a bit wetter and are releasing more gas. Others point to the natural-gas fracking boom in North America and its sometimes leaky infrastructure. Others wonder if changes in agriculture may be playing a role. "There is no question that methane is doing some very odd and worrying things," said Euan Nisbet, an atmospheric scientist at Royal Holloway, University of London.

And they continue to record levels:
https://www.independent.co.uk/climate-change/news/climate-change-methane-levels-record-noaa-global-warming-a9462741.html

Is it credible that methane release on a large scale can cause climate? The geological record does suggest this has happened before: 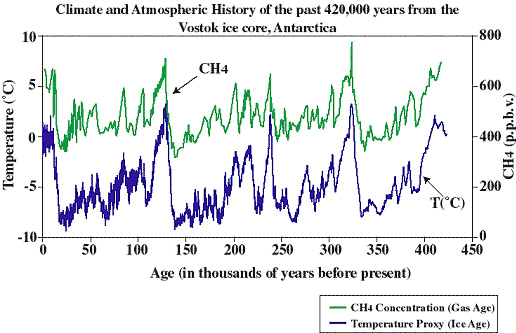 Some authors have researched and posited that methane clathrates were largely responsible for the massive warming at the end of the Permian (the K/T boundary) which was the end of the dinosaurs:
https://www.researchgate.net/publication/304780351_Methane_Hydrate_Killer_cause_of_Earth's_greatest_mass_extinction

A Washington Post article on this if you prefer:
https://www.washingtonpost.com/news/energy-environment/wp/2017/04/21/scientists-just-found-telltale-evidence-of-an-ancient-methane-explosion-in-the-arctic-ocean/

There are large unknowns but, whatever, it looks bad and needs action.

There are risks of methane release, there are issues hardly recognised or modelled such as the compost bomb, and there are facts such as we will have virtually no September Arctic sea ice by 2030.

As David King says, we need to refreeze the Arctic, as well as cut emissions and invest in nature-based solutions globally (Nat's super work https://www.naturebasedsolutionsinitiative.org/).

There are several possible solutions discussed at the end of the astronomer lecture in point 4. Beyond his key point - keep the surface of the Earth as natural as possible and don't disturb it (nature-based solutions) - what is being proposed more and more is that we will also need Carbon Capture and Storage and Geoengineering - because this is a system too far gone. One is the idea to have wind turbines all over the Arctic to recreate the ice:
https://agupubs.onlinelibrary.wiley.com/doi/full/10.1002/2016EF000410. 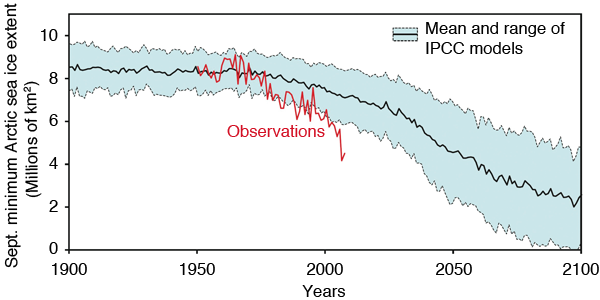 9. Irrespective, we are in an Arctic death spiral

The Arctic death spiral is the documented loss of summer Arctic sea ice: 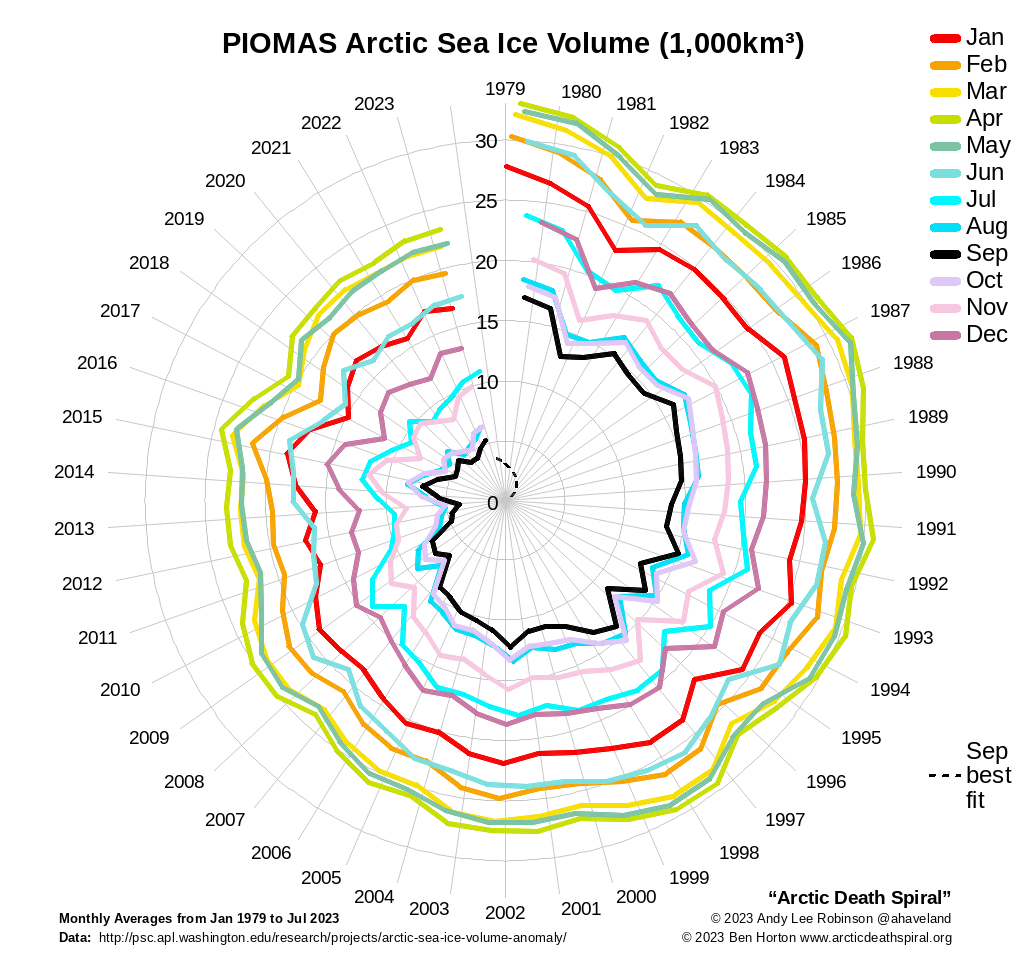 The question is: how rapidly will this spiral spiral inwards, and what positive-feedback systems are kicking in, such as methane, which could send us into unimaginable climate change.

If we realised an asteroid was headed for Earth (the other theory for the climate change of the dinosaurs) in 20-30 years time, even at a low-to-medium 10%-type likelihood, we would mobilise to respond to this. We need a similar-scaled response to the Arctic, permafrost and methane.

PS To the professional scientists in the audience: apologies for a lengthy piece not based on peer-reviewed science

PPS If you want a single recent modelled summary of climate-change socio-economic impacts globally, Mckinsey and Woods Hole Research Centre published in January a report showing that the conditions of the Sahara are due to cross the Mediterranean by the 2040s:
https://www.woodwellclimate.org/report-economic-societal-harms-of-climate-change-likely-to-grow/

And the actual report:
https://www.mckinsey.com/business-functions/sustainability/our-insights/climate-risk-and-response-physical-hazards-and-socioeconomic-impacts

PPPS Further reading: for those interested in the postmodern awakening amongst the humanities that the ecological reality is trumping the doldrums of postmodernism, those willing to read sleight-of-hand philosophy could read Timothy Morton, e.g. Dark Ecology and Hyperobjects, which blends worldview, human psychology and the reality of climate change so much bigger than the human world.