On average about one quarter of rich-world climate emissions come from our food. However, the foods you choose and how they are produced, transported, stored and prepared make a huge difference. The best and worst diets differ in their climate impact by a factor of ten or more!

This page is an homage to Sarah Bridle's fabulous book "Food and Climate Change without the Hot Air", which reviews the scientific literature and serves it up in easy-to-digest portions. The book explains the climate impacts of the main foods in the Western diet, measured in gCO2e/g food. That's the amount of CO2 (or its equivalent) released into the atmosphere per amount of food prepared. I've tried to summarise the most interesting findings.

The tables below present the climate impact of various foods and transportation and preparation methods.

A vegan diet is likely to be most climate-friendly but care is required. A diet including small portions of pork, chicken and eggs is less damaging than a plant-based diet high in either air-freighted fruit and veg or out-of-season salad, which needs to be grown in a heated greenhouse.

Globally, about one third of food is wasted. In western cultures more than half of that food waste is caused by individuals at home.

I've always been suspicious that food miles take no account of the means of transport. This chart makes this clear:

It's far better to eat food grown in season and imported (by land or sea) than it is to eat local food grown out of season.

Some of the climate impacts calculated for animal agriculture come from the emissions caused where the Amazon and other rainforest is cleared to grow animal feed eg soya.

If all humans switched to a vegan diet, only 40% of current agricultural land would be required to grow our food. The redundant 60% could be used for renewable energy generation, to grow biofuels and to capture carbon by growing trees - see Geo-engineering By Reforesting.

This chart of UK land use illustrates just how much of the UK is used for animal agriculture plus, at the same scale, how much additional land overseas is required to feed us: 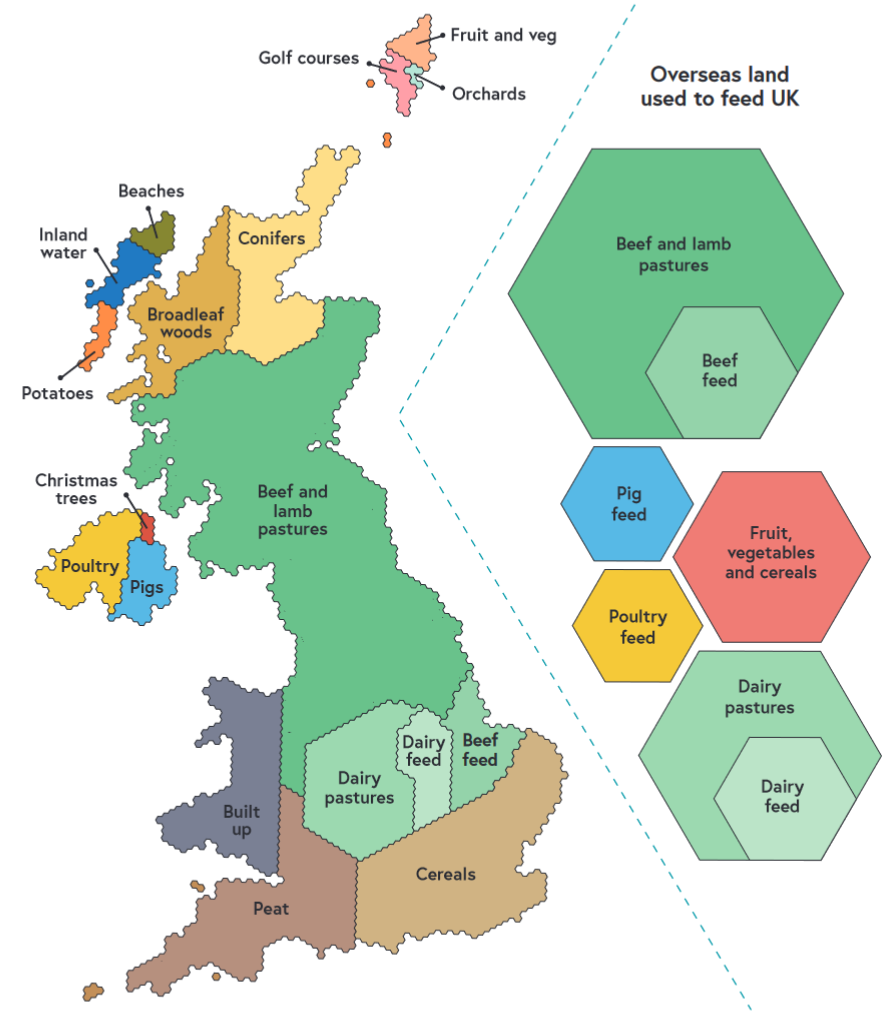 We will be able to reduce the climate impact of our diets. For example:

On the other hand, I can't see any way to reduce the large climate impact of the following:

Back to Arctic Death Spiral | About | Sitemap